Clostridioides difficile (also known as C. diff or CDI) is a bacterium that causes an infection and inflammation of the large intestine or colon (colitis), severe diarrhea—and in some cases, death.

Typically, colonic microbiota (the microorganisms of the colon, or “good bacteria”) act as a barrier in the gut, providing resistance to C. diff and other infections. However, disruption of the natural state of the microbiota, most commonly through antibiotic treatments, results in a person’s increased susceptibility to CDI.

CDI can occur even without a weakened microbiota response to antibiotics. Since the C. diff bacterium is commonly found in air, water, soil, human and animal feces, as well as in contaminated food products, it can be introduced to the gut in a variety of ways. 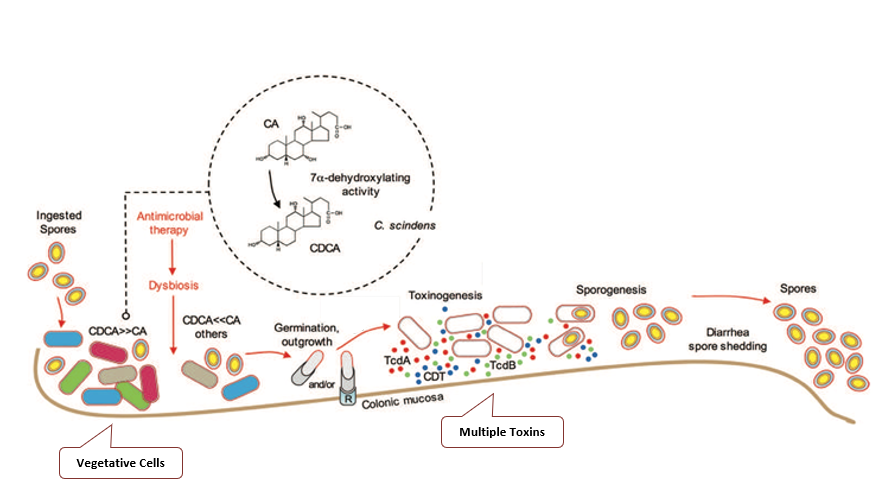 C. diff is very robust in its spore form and with a decrease in the good bacteria, C. diff is able to rapidly reproduce. As soon as 24 hours after the C. diff turns from a spore into a live vegetative bacteria, it begins to multiply and give off a large spectrum of toxins that damage the lining of the colon. The affected cells of the digestive tract become “leaky” and fragile. Depending on the individual’s health, without treatment, this infection will cause C. diff colitis, the inflammatory response to C. diff in the colon. In some patients, this leads to a severe infection referred to as toxic megacolon (a nonobstructive dilation of the colon, which can be total or segmental and is usually associated with a systemic toxin, a toxin that can affect multiple organs), which can be life-threatening.1

With frequent, severe diarrhea as its primary symptom, living with CDI can involve social consequences unique to the condition. For example, feelings of embarrassment can be isolating and potentially lead to depression.

Many people have C. diff in their bodies without getting sick, as it’s a bacterium that is ever-present in our environment.  However, it isn’t the bacteria itself that makes one sick. Under certain conditions, the bacteria release toxins, and the toxin is what causes CDI. Simply having the bacteria in one’s system increases the likelihood of spreading infection, as usually the infected individual who is shedding C. diff spores is not isolating and continues to interact with the community as if they are not infected. There has been an increase in reports of community-acquired CDI in individuals previously not recognized as predisposed or infected.8

According to the National Institutes of Health (NIH) National Library of Medicine, symptoms include the following:9

You are more likely to get a CDI infection if you are 65 or older, are taking antibiotics, have a weakened immune system, recently stayed in a hospital or nursing home, have had a previous infection with C. diff or were recently exposed to it.9 While on antibiotics and during the following month after taking them, people are 7 to 10 times more likely to get CDI. That’s because antibiotics that fight bacterial infections by killing C. diff bacteria can also destroy the good bacteria in the gut that protect the body against harmful infections, like CDI.10

While antibiotics are the default for treating CDI infections, they also have the potential to cause a CDI infection. The most common antibiotics currently used to treat CDI are vancomycin and fidaxomicin, with metronidazole being used in combination with vancomycin to treat serious CDI. An estimated 30% of patients who respond to initial treatment with either vancomycin or metronidazole develop recurrent CDI, usually within 1-4 weeks of completing treatment.6

In cases where the lining of the abdominal wall is inflamed, when there is organ failure, toxic megacolon, or severe pain, surgery may be necessary to remove the diseased portion of the colon.

Roughly 25% of people treated for CDI contract it again, either because they’ve been reinfected with a different strain of the bacteria or because the initial infection was not successfully eliminated. Either way, the risk of reinfection continues to increase with each CDI episode and exceeds 50% after three or more infections.11

Antibiotics. Antibiotic therapy for recurrent infections may involve one or more types and/or multiple courses of a medication. The drugs are usually different from the type of antibiotic used previously. As is the case in many disease states, the effectiveness of antibiotic therapy declines with each subsequent recurrence.

Antibody-based therapy. A monoclonal antibody therapy, targeting C. diff toxin B, the essential component for disease severity, has been shown to reduce the risk of recurrent C. diff infection in those at a high risk of recurrence.12 However, only one mAbs is currently approved and it targets one specific toxin B which makes them ineffective when the treatment needs to address multiple disease toxins or live bacteria.

Fecal microbiota transplant (FMT). FMT is a treatment for multiple recurrent CDI that has been studied in clinical trials.  Current FMT treatments are generally administered only after antibiotic courses are completed, and often is administered as an enema or via colonoscopy.  Many high-risk patients for recurrent CDI are not viable candidates for FMT treatment.

Probiotics. Probiotics are foods or supplements that contain microorganisms intended to maintain or increase the “good” bacteria in the gut. However, research on the role of these products and their impact on C. diff infection is mixed. Research has not consistently shown that currently available products are helpful in preventing or treating C. diff. The American College of Gastroenterology recommends against the use of probiotics for primary or secondary prevention of C. diff. While advanced probiotics are currently being studied for their potential use in the treatment or prevention of C. diff infection, they are not currently available.